A Murder in Gurgaon 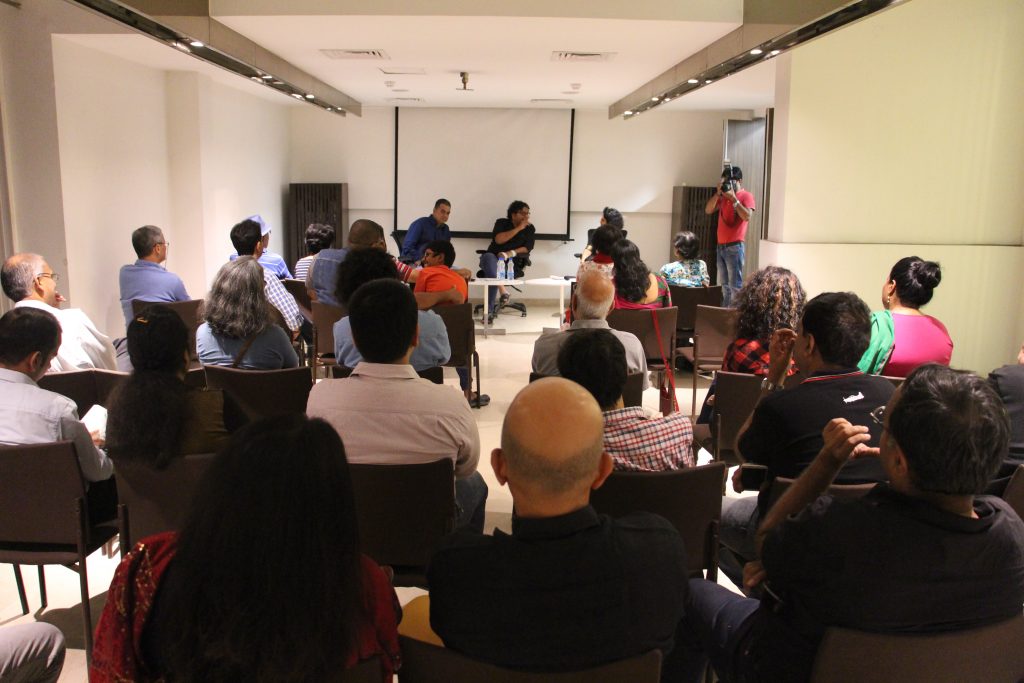 ‘How to catch a murderer” seemed to be the bottomline at a book discussion when Gurgaon’sbook lovers got together on Sunday 16 th October at The Atara in DLF Phase 1 to dissect murder mysteries. On the panel was Manish Dubey, policy analyst turned crime writer, film director Kaustav Narayan Niyogi whose film ‘Cabaret’ is all set to release and founder ofGurgaon Art and Literary Club (GLiterARTi) Meenakshi Sharma.

As the discussion began, there was that very same excitement in the air which makes crime thrillers such a page turner. While some members of the audience shared their love for international thriller authors like Agatha Christie, Ian Fleming, Robert Ludlum and Dan Brown, others applauded the contribution of our very own Indian writers who have dominated our childhood through absorbing detective stories and Bollywood thrillers. Still others in the audience narrated their love for Sherlock Holmes and Hercule Poirot. Thrillers clearly were everyone’s favourite genre at the event.

Dubey spoke fondly of some of his own favourite detectives like Sudhir Kohli (from thePathak books) even while he imagined that his own novels detective well be played by Pankaj Kapur, the swashbuckling carrot chewing Karamchand! It was interesting to note that debutant author Manish Dubey who has lived in Gurgaon for the last five years, was raised on a steady diet of the detective novels of Surender Mohan Pathak and was initiated into this genre by his mother who he jokingly said, “was deep into crime and had that bent of mind necessary in solving mysteries”! He also appreciated his wife Bharati’s support that helped him in polishing the book and making it so taut and racy.

As the intellectuals of Gurgaon discussed what exactly constituted a thriller, the discussion took an interesting turn with audience members discussing its dictionary meaning as a novel with an exciting plot which typically involves crime or espionage. Some readers described Dubey’s book with relish as they shared the excitement of this page turner which makes it ‘unputdownable’.

A Murder in Gurgaon by Manish Dubey was indeed given a huge thumbs up by the book lovers and this was evident in the online reviews as well. Explaining what makes a good murder mystery tick, Dubey agreed that it was important to keep the reader guessing as much as it was critical that they are able to second guess the murderer. He refused to make any character too overpowering, preferring to make the story and the plot, the real hero of the
book.

This thriller called ‘A Murder in Gurgaon’ begins at an interesting juncture when it builds up the story of two friends and then moves to an elderly couple who lose their son. This is a crime thriller which has a carefully constructed murder mystery which is written in a unique narrative format. From then on, it is a roller coaster of a ride which discloses how an ex-cop’s son, a young event manager, is murdered. Inspector Ajai Singh vows justice. There is little to begin with, and frustration mounts when the initial suspect, a reclusive lady with a mysterious past, is found missing. Digging deeper, Ajai Singh uncovers a tale of blackmail, adultery, and revenge when he finds that the victim and predator are indistinguishable and that even his witnesses could be misleading! Revealing more of the story would be a spoiler for those looking forward to read the book. Suffice to say, the author kept the audience engaged with his answers on how he structures the novel, the use of red herrings or unnecessary clues and the focus on getting the job done without wasting time in philosophising. When explaining why Gurgaon was chosen as the backdrop, he revealed that he found it a ‘schizophrenic’ city where the interplay between mofussil and cosmopolitan instincts gave it a ‘menacing’ air.

At the same time, he demonstrated his use of ‘observation’ to maximize the impact as he revealed that he was inspired to write the book by watching the dynamics of a mis-matched couple at Qutub Plaza market! This made him imagine what their story could be like especially when one of them went missing and that became the plot of a thriller!

It was equally interesting to note how technology played a major role in the plot with CCTV cameras and mobile tracking devices becoming important sources. Since the novel is written in a mix of narrative styles, it lends interest and creates a suspense so necessary in a good novel.

It was indeed a wonderful evening well spent with an author who knows his job and readerswho love a good crime thriller.